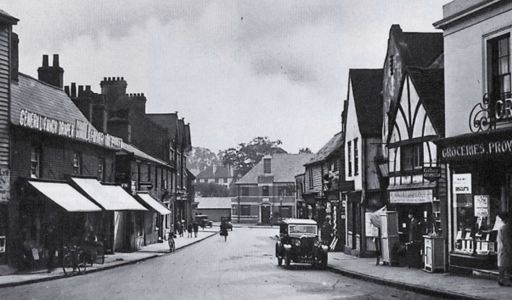 Home to over 60,000 people, Hornchurch boasts a rich history going back to the Roman times, with indications it may have even been occupied before that. Over the centuries, Hornchurch has changed its face again and again, yet the iconic St Andrews Church, from which the town got its name, has endured in some form over hundreds of years. The magic of Hornchurch’s history is that you can still see remnants and throwbacks to it today, so below we’ve put together a brief history of the town we all know and love.

A little-known fact about the town is that Hornchurch has a site of scientific interest. 450,000 years ago, during the Anglian Ice Age, the ice sheet reached just south of St Andrew’s Church, making it the furthest south any ice sheet reached in Britain. This discovery featured in a Channel 4 / National Geographic series in 2011.

The discovery of stone age, bronze age and iron age tools suggest the area was populated and active thousands of years ago. Roman remains have been found on Mardyke Farm, South Hornchurch, suggesting a settlement once existed there.

Hornchurch grew to be a small village by the middle of the 12th century, which is when the first records of it appeared. By roughly 1163 a church had been built on the site of St Andrew’s Church. The area was originally known as Horned Church, which many believe is a reference to the church at St Andrew’s site. The modest village was primarily made up of people making a living from farming, but a considerable leather industry soon took hold. Skinners, tanners, and shoemakers all utilised the nearby Romford market to make a living.

Today we know Romford for being the primary town in Havering, but Hornchurch was once a large ancient parish that divided into the three chapelries of Havering-atte-Bower, Hornchurch, and Romford. By the 16th century, Romford and its town wards of Romford Town, Harold Wood, Collier Row, Noak Hill and Havering had grown larger than Hornchurch.

Remnants of its history can still be felt today – for example, the main street during these middle ages, Pell Street, is today known as High Street and still exists as the main road in Hornchurch, which leads up to the iconic church for which the town is known. During these Tudor times, all men had to practice archery at the Butts – areas designated for archery training. Whilst the location of one of these in Havering is unknown, it is remembered by the street name ‘Butts Green Road’, where our shop resides.

Even in the 17th, 18th and 19th centuries, people took advantage of Hornchurch’s proximity to the capital. Whilst Hornchurch was a quiet area where many well-off people lived, many of them traveled to London by coach and horses for work. Next time you’re feeling sorry for yourself on the commute, think back to how much hassle it would be to get a horse and cart!

The 19th century saw Hornchurch take the steps towards being a major settlement in the region. The Leatherworking industry dwindled in the early 1800s and had all but disappeared by the middle of the century. This was replaced soon after with making farm machinery, industrial goods, and a brewery.

The introduction of the railway in 1885 was a game changer, the village grew rapidly. The end of the 19th century saw just 4,000 people living in Hornchurch – this skyrocketed to 12,000 by the mid-1920s. This surge in population brought new building opportunity to the area. William Carter, of Parkstone (think Parkstone Avenue!), bought part of the Nelmes Manor and begun to build the Emerson Park estate. It is thought that Carter named Emerson Park after his son, and its roads from other personal associations. The original house prices ranged from £300 to £1000. Today we have a property in Emerson Park for £1,250,000.

The early 20th century saw Hornchurch brought into a new world – A piped water supply was added in 1901, around the same time as a sewer system. It gained an electricity supply in 1925 and gained a council in 1926 as it grew into a town.

A military airfield opened at Hornchurch in 1915. It was first used as a basic site during WWI. German Zeppelins were seen to be almost impossible to shoot down, until Leefe Robinson of the Sutton Farm Flyers brought their reign of terror to an end by shooting one down on the 2nd/3rd September 1916. The full story of these Zeppelin busters can be found here.

The airbase was later commissioned as an RAF airbase and saw active duty in WWII, where it was further constructed and ultimately played a pivotal role in the Battle of Britain. Hornchurch pilots accounted for the destruction of over 205 German bombers and fighters, but this came at a price – 68 pilots of RAF Hornchurch died, and today many of these rest in peace in the cemetery of St Andrews Church. For more information on the role of the airbase in WWII, check out the RAF Hornchurch Project.

The airfield closed in 1962 and later became part of the Hornchurch Country Park, as well as being used to build the Airfield Estate – an area which exists to this day. The Good Intent, a popular pub with serving airmen, still exists to this day and commemorates the work of the RAF in its signage.

Hornchurch was brought into the fold of Greater London in 1965 when it was made part of the London Borough of Havering. The people, the educational facilities and the area’s potential continue to make the town ever more prosperous, all the while retaining its historical and communal heritage that makes Hornchurch such a unique place to live.