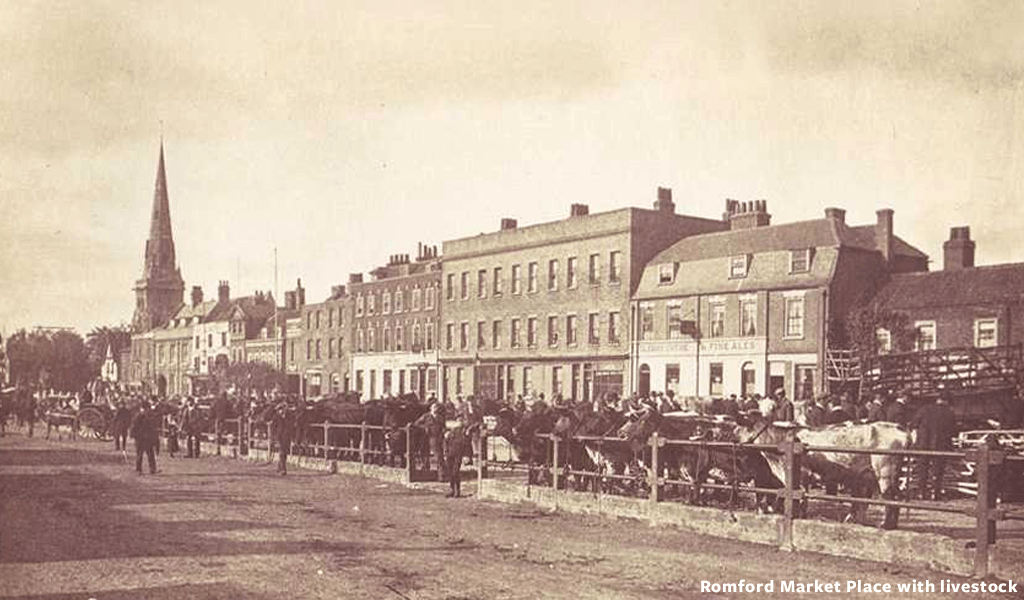 Romford has been an important town for centuries. Go back a few hundred years and you’d be surprised by what you would still recognise. The Golden Lion pub? There since the 1400s. The church on the market? There in some form since the middle ages. Located on the historically main route between London & Colchester, Romford has a heritage dating back to the Roman times.

The earliest historical mention of the Romford area was on a Roman itinerary which referred to ‘Durolitum’. Durolitum is said to have been a posting station along the route between Colchester & London. Its name is said to mean ‘strong lodge’, referring to the lodge-like structure that acted as a coaching inn for Roman officials who needed new horses and refreshment whilst on the road. Think of them as very early public houses. The exact location of this posting station is unknown, but it is thought to have been near Harold Wood station or along Main Road where the three inns are located.

The first record of a Romford-like name for the area was in 1177 where it was noted down as ‘Romfort’, likely referring to the wide ford, now known as the River Rom. This early settlement became known as ‘Oldchurch’ to the south of modern day Romford.

However, this settlement wasn’t to be permanent – it was moved northwards to where Romford is today to avoid risk of flooding from the River Rom. One of the first buildings on the new site of Romford was the chapel that later became the church of Saint Edward the Confessor, located in Romford market. Legend has it that this chapel would be later swallowed up by an earthquake, but its bells could still be heard on St Andrew’s Day. Whether this was the case or not (lets face it, it’s not) a new, bigger church was built in 1410.

Over time the new settlement developed, and in 1247 King Henry III granted Romford the right to hold a market, as well as an annual fair in 1250. The market became a focus for the town, with it being one of two markets licensed to provide supplies for the Royal Court in London. Agriculture became a major driving force for the market, with many mills nearby. By the 15th century, the town started to take on the shape that can still be seen today. There was a new focus on the sale of leather, metalworking, cloth making and brewing. This established Romford is an important place in the region’s economy. The Golden Lion pub by the marketplace was constructed around this time and was said to be used as a stopping-off point for royalty on their journeys. It has retained the original interior feeling of low beamed ceilings, sash windows and swinging name sign. The original carriage entrance can even be found next to the pub! The market gained a renewed focus on agriculture in the 1600s, this time dealing in livestock, fruit and vegetables and other farm goods.

The location of Romford on the main road into London played a huge part in its success. Even then, Romford was interweaved with the success of the capital. It became a coaching town between London & Colchester, which helped the town boom. The route was maintained by the Middlesex and Essex turnpike trust – an authoritative body who collected road tolls for maintaining the routes. Basically, even back then you couldn’t avoid road tax.

The introduction of the railway station in 1839 gave a huge boost to the local economy, leading to the establishment of the Star Brewery. This Brewery operated as a major employer in the Romford area before finally closing in 1993. Today it is better known as The Brewery shopping centre, though its iconic chimney is still worked into the design of the centre.

The original railway – the Eastern Counties Railway, ran a service between Mile End and Romford, with extensions being made the next year to Brentwood and Shoreditch. A second Romford station was set up 50 years later to connect Romford to Upminster & Grays, and ultimately a rail connection to Tilbury Docks, a major source of import & export at the time. It was only in 1934 that both Romford train stations were combined into the one we know today.

The solid rail links led to more industry in the area, most notably the Roneo Vickers office machinery company, which was located at the now titled ‘Roneo Corner’ area. It was the birthplace of Betterware – the company known for selling directly through a catalog of low-cost toot. The railways links and industry are what propelled Romford into being the ‘capital’ of Havering it is today. Wealthy landowners began selling off their estates like Hare Hall, Gidea Park Hall & Mawney Manor to produce suburban developments that expanded Romford, helping to create other local areas we know and love, but that’s for another day.